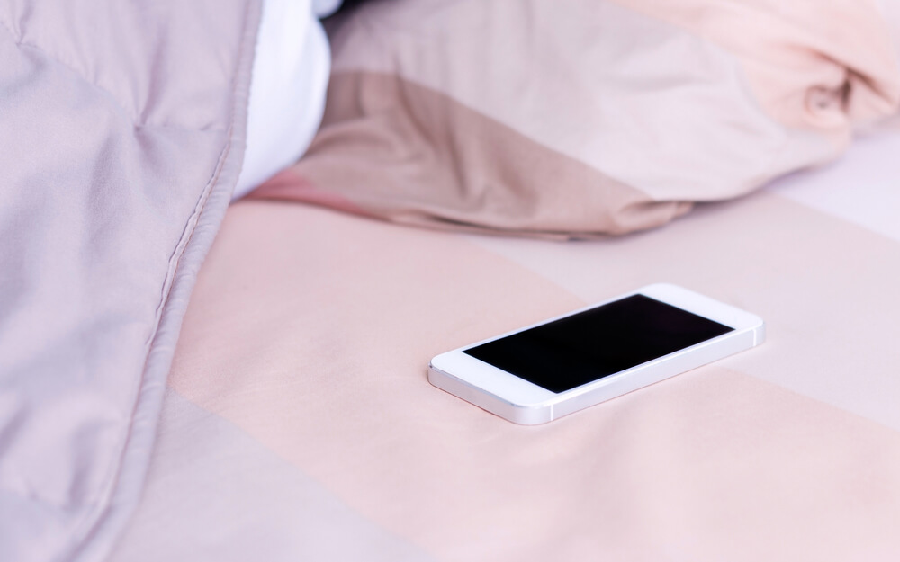 The research was conducted among parents where they were asked how often they allowed their kids to fall asleep next to their smartphones. 30 percent of parents said that they allowed it sometimes or always. On the other hand, 30 percent said that they had completely banned the use of cell phones before bed entirely.

You can always use the best and most reliable parental control apps on your kids’ devices and set screen time limits on them. Several studies have revealed that kids should not be allowed to use their cell phones during nighttime because it can be detrimental to their health. It is a good idea to place parameters around their cell phone use before bed.

Your kids can suffer a number of health problems, both mental and physical if they spend too much time on their smartphones before going to bed. Many kids’ experts have suggested that kids should not be allowed to use their smartphones during nighttime.

Below, we have highlighted a few important reasons parents should not let their kids sleep next to their cell phones. Let’s take a look at them and understand why kids shouldn’t be allowed to use their smartphones at night before bed.

In 2015, a study of about 10,000 teenagers aged between 16 and 19 revealed that those teens who used their smartphones an hour before going to bed faced a much harder time falling asleep. They took almost an hour to fall asleep whereas the medical experts suggest that people should normally only take 15 to 20 minutes to fall asleep.

Hence, it has been proved that the use of cell phones before bed can only prevent kids from not falling asleep any time soon.

Losing Out on Hours of Sleep Time

The Centers for Disease Control and Prevention has recommended that school-going kids should at least get 10 hours of sleep every night. Those kids who do not get enough sleep can be exposed to several health risks.

The National Sleep Foundation has revealed that if kids lose their precious hours of sleep, they can be exposed to several risks such as emotional issues, obesity, behavioral problems, and poor school performance, and low grades.

Worse to Sleep Near Smartphones

It has been studied that kids should never be allowed to sleep near their cell phones at night. In fact, sleeping near smartphones is considered worse for kids and teens than sleeping in front of TV screens. Yes, that’s right.

A study conducted on fourth and seventh-grade students revealed that those kids who slept near their smartphones and other digital devices had gotten 20.6 fewer minutes of sleep, which was also further linked with lack of rest or sleep.

On the other hand, kids who slept in front of the TV screens lost 18 minutes of sleep. It does seem to be a close call but cell phones make kids lose out more on sleep time. Therefore, you should never let your kids sleep anywhere near cell phones and make them lose out on their sleep time.

It is recommended to never keep the smartphone in your kid’s bedroom as it will encourage them more to stay wide awake and use the phone during the night.

When a smartphone is placed within the reach of your kid, especially on the nightstand or a dressing table next to their bed, they will be motivated to stay awake until late and use their phone. When they use the cell phone at night, they will be more likely to watch videos, movies, chat with their friends, scroll through their Instagram feeds and their emails before going to bed.

The experts have found that those kids who spend a lot of time sending and receiving texts in the wee hours of the night are more likely to suffer from anxiety, ADHD, depression, mood problems, and trouble learning.

The Glow from a Smartphone Disrupts Sleep

Many studies have found that the light emanating from the smartphone or tablet screen can disrupt sleep. Even if your kids are using their devices to study and read and not to communicate with their friends, the glow from the devices can disturb their sleep patterns.

In fact, a 2014 study revealed that those users who read articles and books on their devices before bed released fewer amounts of melatonin, the hormone that helps us fall asleep, in comparison to those who read from a printed book.

Since less melatonin was produced in their bodies, it took them much longer to fall asleep. There is no harm in making your kids read from eReaders, Kindles, iPads, and smartphone reading apps as it promotes more convenient ways to read. However, this can come at a huge cost with your kids finding it difficult to fall asleep.

How Can Parents Help?

It wouldn’t be a good idea to separate your kids from their devices. You can adopt a couple of other ways to make your kids get sufficient sleep. You can use a parental control app to limit screen time during nighttime hours.

It is recommended to put your kid’s smartphone away at least two hours before they go to bed. Instead of depending on smartphones to wake them up in the morning, it is better to put an alarm clock on their nightstand.

You should encourage your kids to read from print books instead of making them read through eReaders especially at night. Never let your kids take cell phones to their bedrooms at night. Instead, ask them to keep them outside.