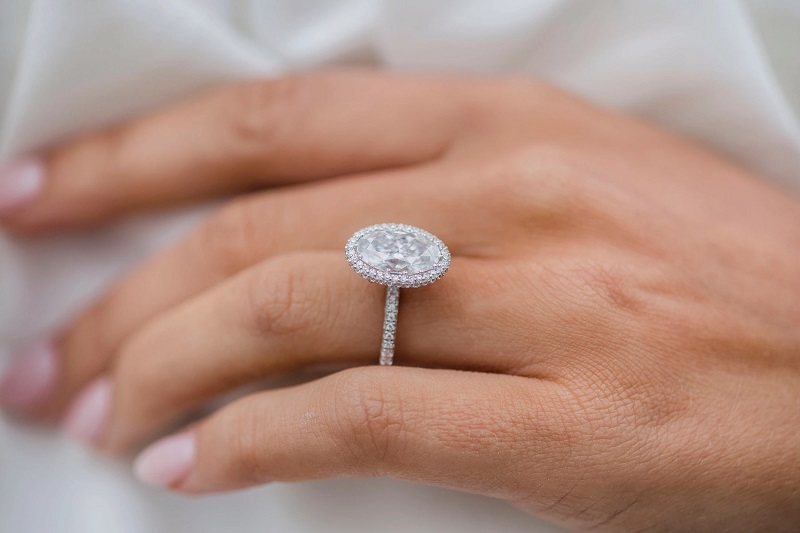 Moissanite engagement rings are as appreciated as the diamond rings. People are now more into moissanite rings than diamond rings. It is very much suitable for engagement rings; you can wear it on a regular basis. Moissanite is a rare gemstone that is born from the stars. First, it was discovered in the year 1893. A French scientist Henry Moissan who was later awarded with Nobel Prize in Chemistry himself discovered this rare gemstone which is naturally made of silicon carbide. It is similar to diamonds.

Initially, he thought that he had discovered diamonds but later he realized that the stone is not actually diamond but it looks like and it is made of silicon carbide. He discovered the macroscopic particles of that gemstone that would have bear his name in Arizona eventually. Available Moissanite today is laboratory-made as natural moissanite is incredibly rare. It is one of the hardest substances in the Universe. It scores 9.25 on the Mohs scale.

As similar to Diamonds moissanites are also having its own grading system. The 4 C is that include Cut, Color, Carat Size, and at the end Clarity. So these are the 4 c’s that the moissanites are graded.

To create the most fire and to maximize its brilliance it is cut specifically because it is a hand-faceted jewel.

Each moissanite gemstone is examined for its color. Most of the moissanites are colorless. But some of the stones are having undertones of the colors of yellow, gray, and green. It enhances both its brilliance and brightness as well.

The third most important factor of moissanites that is size because it Is sold by its size but not by its weight. As an example, we can say while a one-carat diamond holds a weight of 0,88 carats there a 6.5mm moissanite will be the perfect fit for the setting.

Small inclusions can normally happen while the growing process of moissanites goes on. The only moissanite is a kind of gemstone that is passing straighten quality standards. How is moissanite’s price determined?

As we know that moissanites are as good looking an as stunning as the diamonds are. It is a low-cost stone. But it is quite questionable that it becomes so popular. The main reason behind it is maybe it is a low price stone but it is as glorious as the diamond. It shares dazzling quality and refracts the glow the light as same as a diamond does. Not everyone can afford a diamond ring but them willing to have it. So moissanite rings would best option for them. Even the stones are also known for their durability that should be appreciated the most. This popular white gemstone is being more attractive day by day for its eco-friendly aspect.

Moissanites has become a great alternative to diamond

Have you ever imagined an alternative? If not, then think it for. Because now more and more consumers are breaking their way from traditional diamond rings and they moving towards moissanite rings for a change. If you also in that queue of breaking the tradition going for the white gemstones that exactly looks like a diamond and glows in the same way even with cheaper deals. Accordance with the statistics Global Moissanite Market is already set for rapid growth and it is so expected to reach high to the Compound Annual Growth Rate of 6.9% universally by the year 2028. Moissanite is already there at the top so go for it if you are considering an alternative. It does not get dirty and greasy as the other gemstones generally do. It would stay shining for years and years.

Difference between Diamonds and Moissanite

There are a few key differences between diamonds and moissanites. Differences including brilliance, durability, color, and the important thing that is you should have the idea or knowledge to select the ideal gemstones.

A diamond generally reflects the light in three various ways. It is considered as a different kind of way that we could differentiate a diamond from moissanite stones. The colors of the rainbow are reflected through a diamond that is referred to as dispersion and the white light that refracts back is referred to as the brilliance. Scintillation is the third kind of light that is the surface sparkle of a diamond.

One of the hardest minerals is diamond. Diamonds are considered the hardest mineral because it holds the scores of ten on the Mohs scale that is more than moissanite stone. So it is very much suitable to wear on a daily basis. It is popular as the center stone of the engagement ring.

Comparing to the diamonds moissanites scores 9.25 in the Mohs Scales. But it is also a good score but less than diamonds. It is also one of those hardest substances on earth. You can also wear it on a daily basis as it is used as engagement rings also.

Diamonds have a natural body color that contains no color effects like grey, yellow, brown, or any other colors. It is a bright dazzling white appearance itself.

Moissanites are known as a colorless gemstone but still, it reflects a slide color effect of some colors including gray and yellow. We can see a slight reflection if gray and yellow. The larger the moissanates the colors would be more noticeable and the smaller the stone the color would be less noticeable.

So it is determined that naturally both diamond and moissanite stones are colorless but in the presence of light, some color refractions could be shown in the moissanite gemstones.